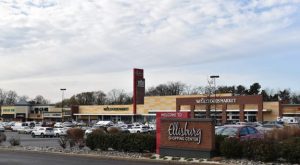 CHERRY HILL – The Ellisburg Shopping Center has stood for decades at Route 70 and North Kings Highway.

But a proposal to add two restaurants there offers a trip down a more figurative road — Memory Lane.

A document filed with Cherry Hill’s planning board lists scores of tenants who have come and gone at one of the town’s oldest retail centers.

The parade of stores includes long-forgotten names like discounter W.T. Grant in the ‘60s and ‘70s, vaguely remembered merchants like Blockbuster Video in the 1980s, and modern merchants like Whole Foods Market.

The filing’s intended to assess environmental conditions at the 27.8-acre site. But it also provides a history lesson of sorts — showing the changes that have swept through South Jersey’s shopping scene.

Consider, for instance, that the plan calls for demolition of a gas station to make way for a free-standing restaurant — its tenant still to be found — off Kings Highway.

Another restaurant, part of the Florida-based BurgerFi chain, would occupy the current home of Mattress Firm. That building would undergo “partial demolition and a retrofit” to accommodate the restaurant, according to Richard Goldstein, an attorney for the shopping center’s owner.

Both restaurants would be around 3,000 square feet, with indoor and outdoor dining. Neither is expected to have a drive-thru service, Goldstein said.

The township planning board approved the proposal at its meeting Monday night, with member Marlyn Kalitan welcoming the pending change at a “historic” site.

“That’s where our first library,” she said, referring to a site that later became a post office and currently holds a Honey Grow restaurant.

The service station facing demolition, now known as US Gas, dates back to the shopping center’s origins in the mid-1960s. Back then, the report notes, it carried the name of a grocery chain — Food Fair Gas.

The assessment, which runs for more than 3,000 pages, notes other examples of once-vibrant stores making way for another generation.

For instance, it says, the Grant’s discount store was occupied by All In One Linen Outlet in 1984 and by Bed Bath & Beyond in 1999. Shoppers now know the site as Buy Buy Baby.

Another original tenant, S.S. Kresge, had vanished by 1980, when its site was occupied by Dee’s Appliances. The property was occupied in 2004 by Ross Dress for Less and most recently held Stein Mart, one of several tenants who’ve closed during the pandemic.

The shopping center’s past is relevant because some tenants, including the gas station, had an environmental impact.

For instance, the assessment notes heating-oil tanks were once buried behind a ShopRite supermarket and the adjacent Washamatic Laundry. Three dry cleaners operated at the site over the decades, it adds.

And it notes a 1992 report that found two tenants — Ellisburg Camera Shop and Perfect Photo and Cleaners — that developed pictures for their customers.

“Both of these facilities recover silver from the photographic development process and discharge their waste,’ said the earlier report, which noted chemicals in the stores included “developers, bleaching agents and corrosive materials.”

The analysis also cites “stained” soil behind the former Playdrome entertainment center, now The Big Event, which shared its building in 1984 with Chef Wang’s Szechuan Wok.

The stain likely occurred because someone from the bowling alley was pouring waste oil onto the soil, it says.

But the biggest impact likely came from the shopping center itself, which is owned by Maryland-based Federal Realty Investment Trust.

The sprawling complex rose at a site that had been used for farming or was forested since at least 1888, the document says. The shopping center appeared shortly after local residents voted in 1961 to change the municipality’s name from Delaware Township, setting the stage for a suburban boom.

Aerial photos in the report show the surrounding area becoming crowded with homes and commercial buildings after the shopping center’s arrival.

That intense growth in 1992 doomed a nearby roundabout that initially led traffic past open fields — and gave the complex its original name, Ellisburg Circle Shopping Center.

As one sign of the area’s evolution, the report notes, the traffic circle’s southeastern side — where a Chipotle is now under construction — once held a combination gas station and produce stand.

The retail complex now holds an L-shaped strip center, six outlying buildings and — the most recent addition — a solar field behind the Playdrome.

The report, prepared by California-based Partner Engineering and Science Inc., unearthed the shopping center’s past with help from township records and vintage telephone directories.

Its findings apparently overlooked a twin theater that drew crowds into the early ‘80s, before morphing into a sporting goods outlet, a book shop and a dollar store, among other uses.